This report assesses the sellside imperatives driving the futurisation of OTC fixed income swaps, looking specifically at the dynamics of OTC IRS and CDS indices trading. The report assesses how the regulations in both the EU and the US are impacting the market structure for trading in these instruments, and it provides an analysis of the possible reasons for the slow uptake of exchange-traded swaps futures.

The implementation of the Basel III accords – which generally mandate higher capital charges for OTC trading – led to the expectation in the marketplace that sellside brokers of OTC swaps liquidity would eventually stop using bespoke manufactured, cleared or uncleared SEF- or OTC-traded swaps to hedge their positions and, instead, turn more toward the use of exchange-traded, standardised swaps futures as a means of replicating swaps trading flows. This expectation is generally known in the swaps marketplace as futurisation, wherein OTC liquidity flows transfer into listed futures marketplaces.

While the onset of futurisation in the OTC swaps marketplace was delayed in recent years by a general lack of available listed swaps futures contracts, GreySpark Partners believes that futurisation will eventually manifest in both the EU and US swaps markets. As a result of the onset of the futurization effect, many investment banks will find that their FCM divisions will drive the generation of an increasing proportion of fixed income trading revenues from fees charged for clearing brokerage services. Such a shift would surely carry with it a number of cultural and political ramifications that key stakeholders within those organisations may find troubling. 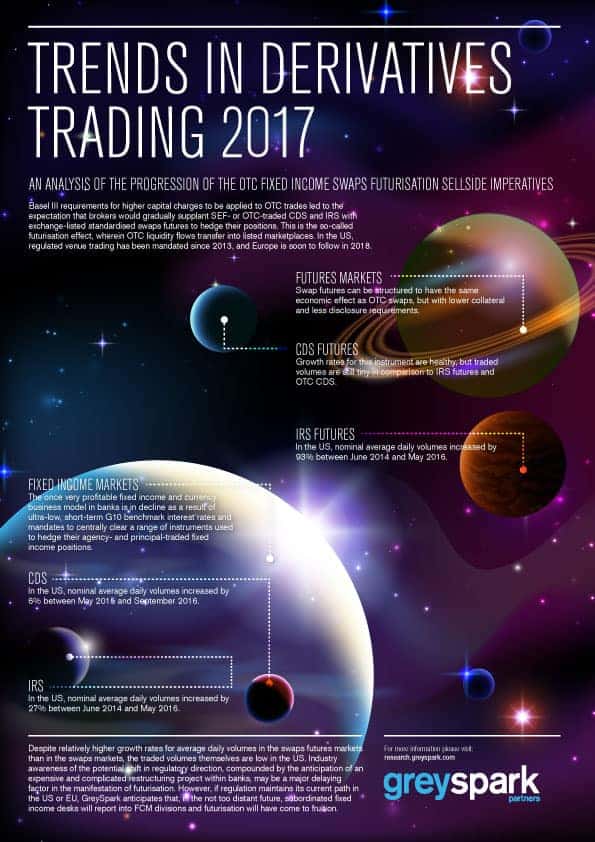